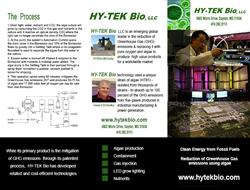 HY-TEK Bio LLC arose in 2008 from an attempt to help a friend realize a dream.

Bob Mroz, a gifted electrical and software engineer with a 30-year career at the Federal Communications Commission, was already also successful in private enterprise. While he was still with the FCC, Bob started a company to develop software that would track elite athletes’ performances in swimming and track & field events. His success in local                                        swimming eventually brought him and his now 2 partners into the Olympic
level as well as Track & Field events. After 27 years on the market and
continued development with the Olympic Training Facility in Colorado
Springs, the software had a Customer base of over 59,000 users in 36
countries, and its use was mandated at every sanctioned swim and track &
field meet in the world. Bob sold that Division of HY-TEK Ltd to a San Diego-based company in 2008.

At this point, Bob was asked by a friend to help him produce fuel from algae so he can be the first person to fly an ultralight aircraft on biofuel. Unfortunately, another person in New
Jersey became the first to fly an ultralight on biofuel, but Bob had become intrigued by the unique properties of algae not as a biofuel source, but as a means to consume large amounts of CO2 and other greenhouse gas emissions.

Bob, built a small algae bioreactor and asked the University of Maryland’s Center for Environmental Sciences (UMCES) for advice. When the University placed an order for six bioreactors, Bob realized the vast market potential of algae.

He continued his cutting edge research in cooperation with the University, eventually receiving his first $100,000 grant from the state of Maryland under its Maryland Industrial Partnerships (MIPS) Program. With that first $100,000 MIPS grant, UMCES isolated a single strain of algae for HY-TEK Bio from among the hundreds of thousands of strains known worldwide. The strain, now called HY-TEK Bio Strain #1, or HTB-1, has numerous unique properties and is a critical component in successfully mitigating greenhouse gas emissions from any source of fuel, including coal, oil, natural gas, methane, and biomass. So as HY-TEK Bio’s mitigation technology evolved, Bob clearly saw the market benefits to utilizing algae to mitigate greenhouse gas emissions: Its high-lipid content makes it a perfect source for pharmaceutical and nutriceutical products, food additives, cosmetic and paint thickeners, bioplastics and biofuels. A further benefit of the photosynthetic-based technology is that high quality oxygen is also generated by the mitigation process. Bob, in collaboration with the HY-TEK Bio team and the UMCES staff, continuously implemented improvements to the mitigation and algal growth process as well as to the several spin-off technologies.

More grants followed from the MIPS Program, and HY-TEK Bio started its demonstration-scale project at Baltimore City’s Back River Waste Water Treatment Plant in late 2011. At Back River, HY-TEK Bio has been capturing flue gas output and mitigating the greenhouse gas emissions from a 3MW methane-fired power plant since mid-2012. With the support of numerous partners and sponsors, HY-TEK Bio is now an emerging global leader in reducing greenhouse gas (GHG) emissions and generating oxygen and high value by-products from algae.